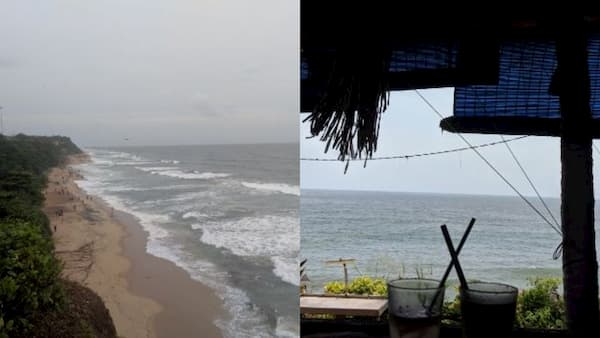 2 years back, some of our friends visited Varkala and they gave us good reviews. From that time it was in our wish list. Hah! And we made it in August first week. And believe me it’s Amazing!. Beauty of this beach is that it’s a cliff beach as the name suggests. Entire cliff is full of restaurants shops and hotels facing towards the beach, at restaurants you can sit and feel the cool breeze coming in. Most of the restaurants are roof top or has steps pattern in it which makes it easy to sit anywhere inside the restaurant and you will be feeling cool breeze coming in. It is a great place to sit have tea/coffee read books spend quality time with each other, it’s just amazing. And going near beach having fun at water has its own charm. So if you are on beach or at cliff you will enjoy both the places.

August is part of the rainy season, but we were lucky travelling on the weekend that had very little rain. We reached Varkala on Saturday early morning around 7am, took flight from Bangalore to Kochi and then a train from Kochi to Varkala. I will talk about the travel details later on the post. We booked a place called Mad About Coco for our stay. Reception desk staffed from 8am onwards so we relaxed for an hour at a café - Nomad. We later found out that the café has breakfast tie-up with the lodging. Tea felt even more refreshing with sea view and cool breeze in the morning.

Then we checked in to our room. After freshen up came for breakfast at Nomad, where we had our complimentary breakfast and it was decent. By the time we finished our breakfast it was 11.30 am. 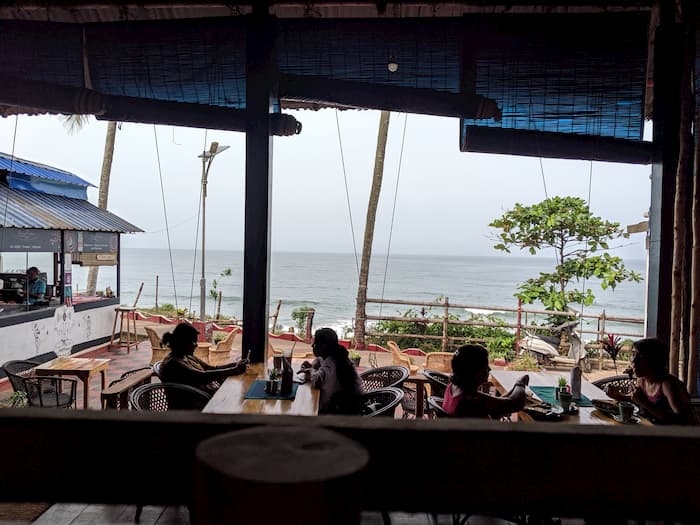 In most places they keep breakfast till 12 O’clock. We rested for the afternoon as we were very tired. In the evening we took a stroll along the narrow 2km pathway on the cliff’s edge. The sea on one side and the shops on the other. It is not as scary as it sounds, here is a photo. 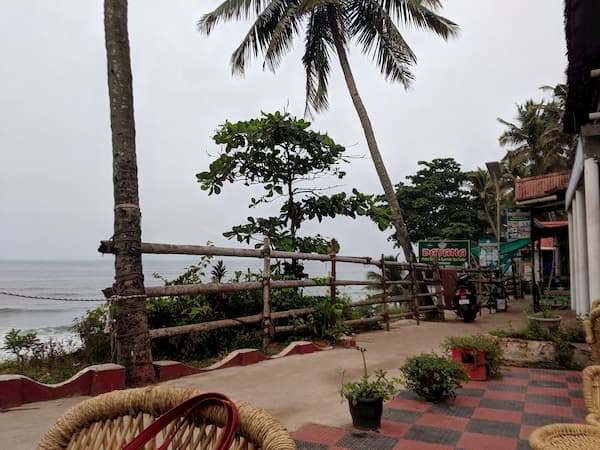 After walking around 600m, we reached a restaurant called coffee temple, where we had carrot cake, chicken fried rice and mango lassi. It was good, much recommended. 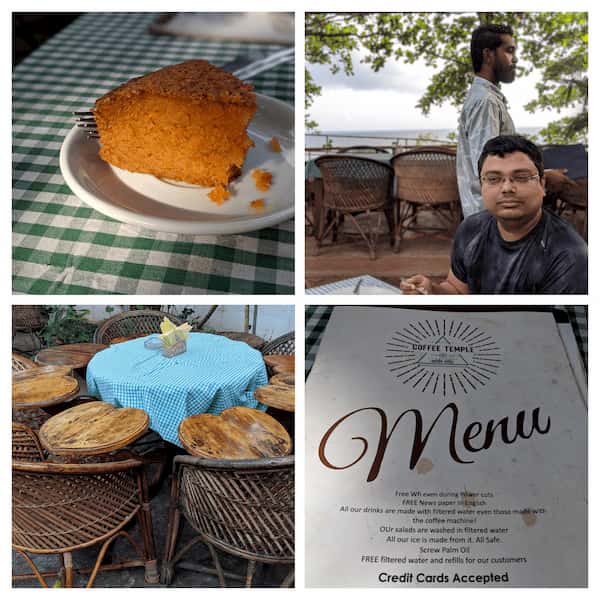 There are multiple paths to go to the beach from the cliff. We took the stairs down from in front of the café Sky Lounge.

It was a clean beach with the official lifeguards on duty. There is no water activity. Spent evening watched sunset, got wet enjoyed that time to the fullest. 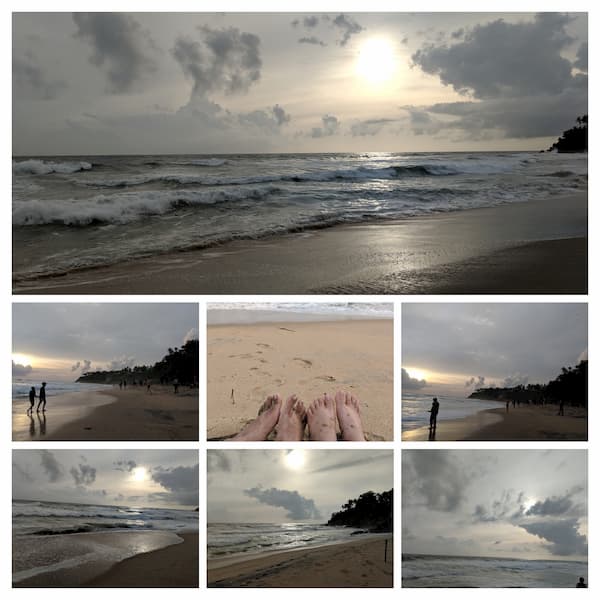 Came back up had tea at Sky Lounge. Went to the room after freshen up came out for the dinner around 8 O’clock. As our hotel receptionist suggested Darjeeling café is good, we went there. We ordered chicken curry Kerala style with naan and it was amazing.The place was crowded. 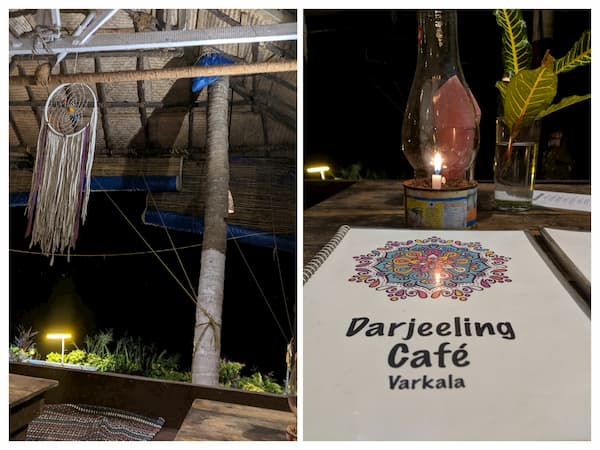 Sunday morning after finishing our breakfast at Nomad we walked towards Prasanthi Cliff beach resort(we booked this hotel and they cancelled it for some reason). We walked even more and saw there is another separate part where people go down to the beach. Went there and spent some time. 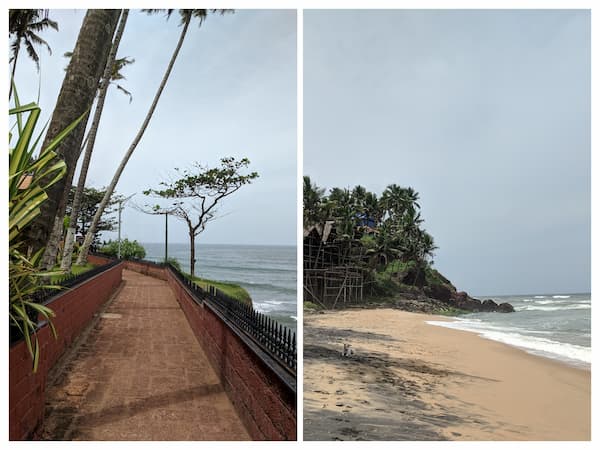 As it was very humid, we were sweating quint a bit and we wanted to find a place to relax. Not in the mood to explore further, we went back to the place we knew best - Darjeeling cafe. Here we had some cool drinks and spent some time reading books. Had lunch also here, I tried my fav Thukpa for the lunch and it was decent. 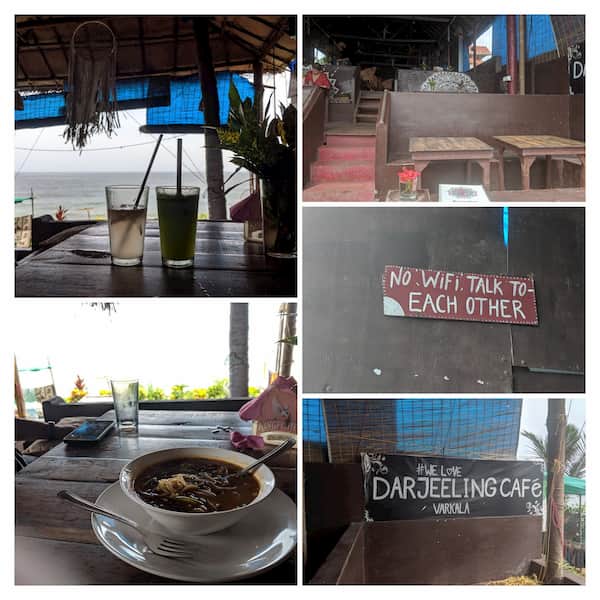 We spent the evening walking along the beach, enjoying the sunset, playing with the water, breaking the sleepers.

We tried a different place, Cafe del Mar for dinner and to start with we ordered a pastry. It tasted very mediocre, we didn’t feel like having dinner here so we went back to our favourite- Darjeeling cafe. The place was not much crowded, so we realised Varkala is crowded on Saturdays.

We got to know on Sunday that our Monday morning train got cancelled due to the flood like situation in Mumbai. Thankfully we got another train ticket which was in afternoon. As so much happened with this cancellation and all our hotel receptionist helped us staying for some more time and arranged a vehicle as well to go to the station. I must say people at Mad About Coco was very helpful though-out our stay. Yeah, Monday morning we had our breakfast at coffee temple, normal dosa and french toast tea and coffee. Came to room packed our bags straight to station. Unfortunately our train was delayed by 1 hour, and we had to wait and i must say its not easy as this place is very humid and station is also very small so not much facilities there. Finally boarded the train and reached Kochi station at 5.30pm. Went to our home stayed for the night and next day along with parents drove to Bangalore. It was raining a-lot and we had to stopped at few places, we left Kochi around 6am and reached Bangalore around 5pm.

There is one nearby airport Trivandrum. One can take train or cab from here to Varkala. Cab from Trivandrum to Varkala will cost around 1500rs. There are lot of trains also which barely takes one hour to reach Varkala from Trivandrum. This is the recommended option.

Other option is from Kochi airport go to Aluva railway station. Catch train which takes around 4 hrs to reach Varkala or cab which will cost around 5000 rs.

Varkala railway station is very small, most trains stops there for 2mins and you have to depend on announcements and train live status. As there are not much facilities out there. From Varkala railway station to north cliff it takes 10mis by auto. You can take any auto from outside and they will charge around 100rs.